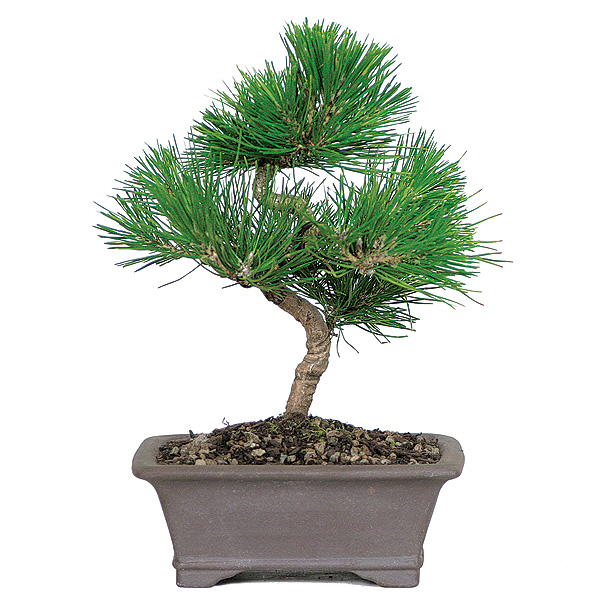 The Japanese black pine is a native of Japan and is arguably one of the most classic of bonsai pine species. The Black Pine is a very vigorous tree that is commonly grown in Japan in parks and ornamental gardens where impressive heights of up to 25 feet and an outreaching spread of 20-35 feet are commonly reached. Black Pines are very tolerant of poor conditions, surviving in nature on barren, stony soils. White pines are frequently grafted onto the more vigorous Black pine rootstock to improve its vigor and growth-rate.  Being extremely hearty and disease free makes the Black Pine bonsai perfect for beginners and masters alike.

An outstanding, small, irregularly-shaped Pine with exceptionally dark grey-green, five to seven-inch-long twisted needles that are presented in groups of two. Though the needles are naturally quite long, the needle-size can be reduced in length with the use of bonsai pruning techniques.  Branches are held horizontally in a picturesque silhouette and sometimes can outgrow the central leader forming an attractive multi-stemmed specimen tree featuring lovely purplish-grey bark that becomes very craggy and fissured with age.

The black pine does not like extreme heat, especially around its roots. This bonsai will desire a cool-down from spraying the foliage with water daily during the summer. It prefers living in colder climates and will need special care and attention if grown in warmer regions.

This bonsai will thrive in full sun and demands good air circulation. It is best to turn the tree from time to time so that light reaches all parts of the foliage.

This bonsai is drought tolerant and can be allowed to go dry between watering making it a great choice for anyone that travels frequently.  It requires good drainage and will benefit from the moisture offered by a humidity tray filled with stones for the cooling protection it will offer to its roots.

Fertilize every 4 weeks during the growing season with an acid based fertilizer.

Prune during the early spring and begin pinching at the end of spring when the buds have matured. First pinch the undesired weak buds and a week later pinch the undesired strong ones. Then, as a result of this first pinching, selectively remove buds in the weak areas, leaving only the biggest and strongest. In the strongest areas leave the weak buds, removing the biggest and strongest. Remove needles growing from the top and bottom of branches, leaving only lateral needles. Every other spring, if the tree is healthy, you can remove all of the new candles. The following fall, buds will appear where the candles were removed. Following this technique will shorten the needles significantly and increase foliage density.  You can wire this tree, taking care not to injure the bark, during the winter months when the bark will learn over the dormant season to hold its shape, rewire as needed taking care not to snap delicate branches.  This bonsai is most commonly seen in an upright form.

This tree is extremely hearty and is not usually susceptible to pests or disease, though stressed trees are more susceptible to attack. Keeping your tree healthy will ensure that you are able to avoid problems commonly found in other types of bonsai.

Black pines can be most easily grown from seeds that are sown in sand in early spring. The seeds should be soaked in water for about two days to start germination. Be sure to discard any seeds that are floating in the water as they will not germinate. Black pines may also be propagated by grafting and from cuttings.

Repot black pine bonsai in the spring before the buds begin to swell. An even soil mix of coarse sand, calcinated clay and peat is best. The container may have to be larger than traditional bonsai pots so that the feeder roots will not dry out and die at the end of a hot summer day. It is important to ensure that your black pine has enough pot for its roots to enjoy the added moisture and nourishment. To take up nourishment, pines need to have a special type of fungus in the soil around their roots.  This fungus appears as a white, stringy material called Mycorrhiza; the symbiotic Mycorrhiza attaches itself to the tree’s roots actually becoming like the trees own root hairs.  While the Mycorrhiza gets vitamins and life giving carbohydrates from the tree it also produces ions which it transmits directly to the tree and gives the roots more efficient access to nutrients in the soil by providing a more absorbent surface on the root system and dissolving silicates in the soil into readily available nutrients with the acids it produces.   Mycorrhiza is also suspected of producing nitrogen and natural growth hormones which protect the root system against pathogens.   When repotting, make sure some of this helpful fungus is included in the new soil mix to ensure your bonsai’s health and well being.

Occasionally a black pine will have a "witches' broom" growth on a branch that is caused by a fungus infection. It is a thick clump of smaller branches that have dwarfed foliage. Trees that are propagated from witches' brooms make wonderful bonsai subjects as they have compact foliage and needles which are very short and erect. Bonsai propagated from witches’ broom stock are called "Yatsubusa".