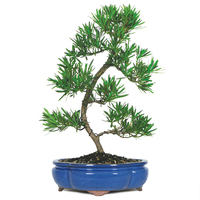 If you're looking for a truly distinctive-looking Bonsai which is also a perfect tree for beginners, we'd like you to meet one of our personal favorites: Podocarpus Macrophyllus, sometimes also known as the Chinese Yew or The Buddhists' Pine.

The Podocarpus is an evergreen conifer, so it will look great year-round without any dormant periods, while producing cones and often even fruit! (More on that in a moment.) It's also got a very unique look, even among Bonsai, and can change drastically over the years. You might even consider making a 'baby pictures album', documenting its progress.

And, it's exceptionally easy to care for even by Bonsai standards...

Podocarpus: A Great Bonsai For Beginners or Enthusiasts

There are plenty of noteworthy features of Podocarpus, although the most obvious are its foliage. The dark green, leathery, pointed leaves truly stand out in almost any setting, guaranteeing that Podocarpus draws plenty of attention to itself!

It also has a relatively sturdy trunk with equally stiff asymmetrical branches. It's slow-growing, but over the years, the trunk will continually expand. An older Podocarpus can look absolutely stunning, really capturing the "nature in miniature" ideal of Bonsai cultivation - which is undoubtedly why it gained its reputation as a favorite of Buddhist monks.

As to why it's good for beginners, there are a few reasons:

While, of course, extremes of temperature are bad for Bonsai in general, Podocarpus can survive light frosts as well as relatively high temperatures. Dehydration will kill it far faster than heat will. So it's a great choice for a wide variety of climates.

2 - It's primarily an indoor tree.

A Podocarpus can be grown outdoors, but it's far more comfortable indoors. This means it can be closely observed from day to day, as well as making a great statement in your home.

Basically, you're not going to want to try to influence the Podocarpus's growth much. The stiff, thick trunk and branches don't bend easily, so there's far less temptation for newcomers to meddle. Just let it grow naturally, and express its own personality. It's a Bonsai you work with, rather than trying to dominate or force a look onto.

If you want to influence its growth, use temperature instead. It grows faster in warm places, and slower in cooler areas.

And The Proverbial Cherry On Top...

Besides producing its own tiny cones, which can be adorable in their own right, most Podocarpus Bonsai also produce fruit... and they're edible! In fact, Podocarpus fruit are quite tasty, even raw, making for a nice little seasonal bonus during spring pruning.

Now, for full disclosure, the fruit are slightly toxic. But then again, so are apples. You wouldn't want to eat a big bag of them, or you'd end up with a stomachache. However, the amounts produced by a typical Podocarpus Bonsai are going to be small enough you can chow down without any worries.

(They can also be easily turned into jam, which negates the toxicity, but getting enough fruit to do this effectively would be tricky.)

For those looking for a gift Bonsai, a Podocarpus is a perfect choice. Because it's hard to kill, and also naturally grows into a beautiful setpiece without training, it's a tree you can give to nearly anyone and know it will survive for years.

Or buy one for yourself, and have a natural decoration to treasure!

If you want more information on Podocarpus care, just check out our own care guide. Or, as always, just contact our experts with your questions!