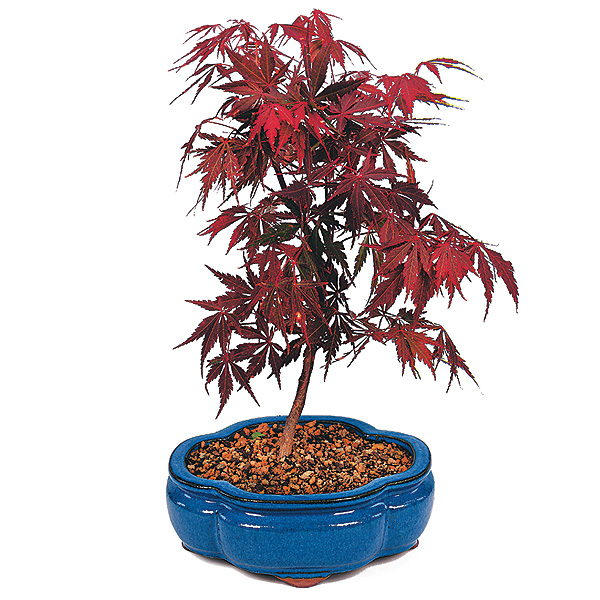 Click on image to see BonsaiOutlet.com current prices for this tree

The Japanese Red Maple – Acer Palmatum – This maple is native to China and Japan. Its botanical name comes from its leaves, which have 5 or more deep lobes and vaguely resemble a human hand. It is a popular bonsai subject in Japan. The bark on young branches and trunks is usually green (may be red on some varieties) and turns brown or light gray with age. There are many different varieties of A. palmatum, including thread-leaf and lace-leaf varieties and both green and red varieties. The red varieties seem to be more popular as bonsai.

The Japanese Red Maple should be placed where it will receive morning or evening sun but will not be in direct sunlight at the height of summer, and do not water in direct sun. The delicate foliage can “burn” if exposed to direct summer sun. It may be that maple leaves turn brown and curl when exposed to direct sun due to the presence of dissolved minerals in the water supply which build up in the leaves. The traditional opinion has been that the burning effect happens because of water droplets acting like a lens to concentrate the sunlight. Anecdotal evidence can be found to support either point of view.

The Japanese Red Maple prefers wet to moist soils. Water daily but keep good drainage to prevent root rotting. More bonsai die due to improper watering than any other cause. An old bonsai watering trick is to place the entire pot in a sink of water an inch or two deep. Let the water absorb from the holes in the bottom of the pot. An inexpensive moisture meter takes the guesswork out of watering. We sell them on our website.

Fertilizing a bonsai is essential to its health because nutrients in the soil are washed away with each watering. Fertilizer is like vitamins and minerals for a plant. However, do not feed for two months after repotting or when a tree is weakened. Stop feeding for a month or two during the hottest part of the summer. If you prefer to use chemical fertilizers, feed every other week with a half-strength solution of a balanced fertilizer, such as Peter’s 20-20-20. Another option is feeding every 20-30 days with a slow-acting organic fertilizer in the spring and autumn.

Root pruning should be accompanied by branch pruning so that the root system is not overstressed trying to supply nutrients to an oversize branch system. Branch pruning should be done mainly in fall or winter to avoid excess loss of sap and so that the shape of the tree can be better seen. Seal pruning wounds with a wound dressing, a putty from Japan that works well and can be cleaned up after the wound has healed.

To develop fine branches and avoid long internodes, pinch back new growth during the growing season. Pinch back new shoots by pruning them to two sets of leaves (internodes.) An internode is the space on a branch from one pair of leaves to the next. In Japan, the centers of new shoots are removed with tweezers and a magnifying glass just as the shoot is opening up for maximum internode reduction. If a branch has already been allowed to grow out with long internodes, the only way to shorten them is to cut back the branch to the first internode and re-grow it, with appropriate pinching to keep the internodes short.

Leaf pruning (removal of leaves during the growing season) can be done every other year in early summer to encourage smaller leaves. All of the leaves are removed from the tree, leaving the leaf stems on the branches. This “false autumn” results in a second set of leaves that is smaller than the first set. Do not leaf prune the same year that a tree is repotted.

Maples are usually shaped by pinching and pruning. If wiring is necessary, wire in summer when the tree is in full leaf, protect the bark with raffia, and do not leave the wire on for more than six months. The trunk of a young maple can be shaped by tying it to a stake so that it is bent in the desired shape or kept straight if a formal upright is desired.

Repot every two or three years for older trees, at least every other year for young trees. Repot in spring, shortening the roots by up to half their length. The roots may be washed in water to make repotting easier. Any dead or damaged roots should be removed to avoid root rot.

Aphids, mildew, or root rot may become a problem.

Aphids infest maples and may be numerous at times. High populations can cause leaf drop. Another sign of heavy aphid infestation is honey dew on lower leaves and objects beneath the tree. Aphids are controlled by spraying.